In the Indias Kashmir region, Leh Ladakh is a union territory. Ladakh is welcoming to tourists and has a culture related to Tibetan culture. Being in Ladakh is like being in the middle of nowhere in a city that offers every amenity possible for visitors. Hence, this trip should be planned well, and given enough time, so that you get to see the Top five Tourist places in Leh Ladakh. 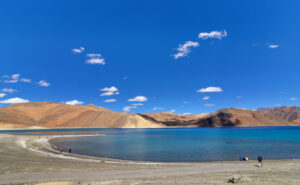 The most popular vacation spot in Ladakh is Pangong Lake, it runs from India to Tibet and is also called Pangong Tso, 12 kilometers long. Here, tourists are familiar with Ladakh Lake because this is where the Bollywood film 3 idiots was shot. The Le tourism office provides permits for a nominal fee. While foreign nations require a group permit. Indian citizens can get readily Individual permits.

One of the most spectacular tourist places in Leh is the magnificent Leh palace. King Sengge built this palace in the 17th century and continued to be the Kings residence. One of the foremost tourist spots in Leh, You can also view the mountains of Stok Kangri in Zanskar towards the south from here while the Ladakh mountain range rises behind the palace towards the North. The night view of this palace is quite charming too though you will not be allowed inside after the sunset. 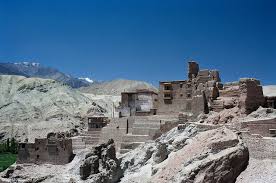 Located around 40kms from Le is the small village of Basgo, which in ancient times was considered a political and cultural center of Ladakh, and is now one of the important tourist places. The ancient Basgo palace that also houses the Basgo Monastery is located here. They built the ancient palace in the 15th century but we believe the Monastery to be even older than that. 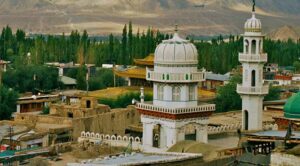 It is a Historical Mosque built in 1666-67, that has been rebuilt several times. It is a symbol of agreement between Deldan Namgyal, King of Ladakh, and Mughal emperor Aurangzeb where in Mughals protected the Ladakhi king in return for a small fee. It is the biggest mosque in Ladakh and is also noted for the Shahi Hamdan memorial that is built to honor Mr. Syed Ali Hamdani, a Muslim Sufi saint. 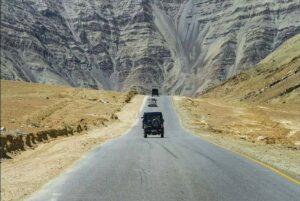 A popular point to stop by during your Ladakh Road trip is Magnetic Hill. The common belief about the place is that hills here have magnetic properties and the pull will get any vehicle moving uphill even with the engine turned off. Travel 35 km on the Srinagar-Leh Highway en route to Leh to unravel the mystery of Magnetic Hill.