Bangalore is the second-fastest-growing metropolitan city in India. If you are in Bangalore or nearby, consider yourself lucky because there are plenty of hill stations with the natural beauty of climatic conditions for the best way to relax. As you can see down below, some of the Hill stations near Bangalore. 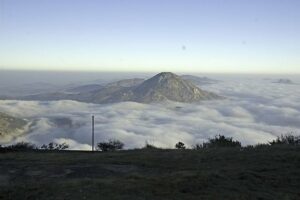 Nandi Hills has located 65 km from Bengaluru and is the most popular weekend gateway. It is one of the tourist spots that visitors have gradually discovered. At the height of 4851 feet above sea level. When you walk around hills through mountain tracks among innumerable scenic spots, you can get a very rejuvenating experience. It offers you historic spots too, where Tipu’s Drop is a 600 feet high cliff from where, according to legends, prisons were pushed to death. Features a beautiful, rich mountain valley, sharp hairpin turns along with steep slopes, small cottages clinging along the mountain edge, and a cold breeze with blue sky. These are the reasons enough to plan a vacation trip to Nandi Hills. Mainly tourists can enjoy the sparkling water of Amrita Samovar, one of the major attractions that tourists can enjoy here. Trekking is the major activity done here along its terrains but also offers the thrills of parasailing and para-gliding.

When you plan for a weekend trip to the hill station, I would suggest Sakleshpur is the best tourist spot in Karnataka with good homestays and a favorable atmosphere. Sakleshpur is the gateway to the Western Ghats from Bengaluru and Hassan’s side. Popularly known as the “Switzerland of India”. It is one of the best scenic spots near Mangalore. Beautiful green hills surrounded this town, fascinating mountains, pleasant weather, and scenic beauty covered with coffee, cardamom, pepper, and areca plantations, which are the major attractions one can experience when one plans to visit this place. It is the major producer of coffee and cardamom output in India. This Hill station got the name “Poor Mans” Ooty. This town has taken a new step by introducing the Railway Bridge trekking. You can trek on the 52km long railway track between Sakleshpur road junction and Kukke Subramanya temple. In this journey, you can get an unforgettable long-lasting experience of at least 25 waterfalls. 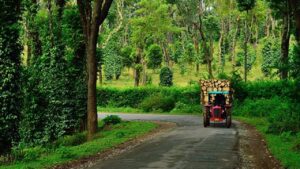 It is one of the top of Hill stations near Bangalore to visit in Karnataka, India. Coorg is the name with which masses remember this hill beauty of the south, which is nothing but the anglicized version of the local name of the place, Kodagu. Misty hills, lush forest, coffee and tea plantations, orange groves, undulating streets, and breathtaking views have made Coorg an unforgettable holiday destination. Here, there is a famous river Cauvery is originated in the hills of Coorg at Talacauvery. 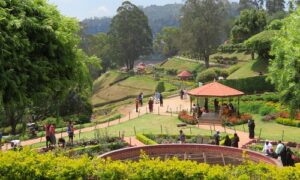 Amidst, Nilgiri Hills, Ooty, also known as Udhagamandalam, is One of the most popular places in Tamil Nadu and serves as a top-rated tourist destination state. It is the perfect tourist spot for everyone, especially couples and honeymooners. They have popularly known the mountain range found in this region as the Nilgiri mountain region. Ooty became famous to tourists because of its excellent scenic beauty and climatic conditions. Towering mountains, sprawling tea gardens, nature’s gift of scenery everywhere, splendorous flower gardens, and beautiful climatic with raining clouds all the time. 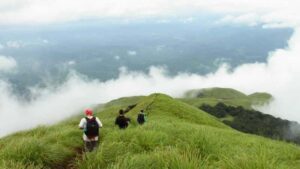 Chikmagalur is a beautiful district in the Western part of Karnataka. It is the most popular coffee plantation, and it’s a pleasant climate. For other renowned attractions, it is popular for its Bababudan Giri ranges. The literal meaning of Chikmagalur is “Land of the Younger daughter”. There is a local belief that coffee was first made in Chikmagalur and you can find the Central Coffee Institution center here. Apart from this, several waterfalls like Hebbe falls in this region attract many tourists. This is one of the most popular hill stations near Bangalore to visit with its lusty green forests and fascinating mountains during summer, and trekkers especially loved it. 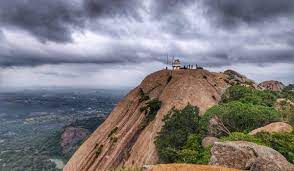 Savandurga has the reputation of being one of the largest single rock formation hills on the Asian continent. It is also a preferred location for slab climbing near Bangalore. The temple at the foothills further adds to its popularity. At a height of around 4025 feet from sea level, Savandurga gives you commanding views of the surrounding region. 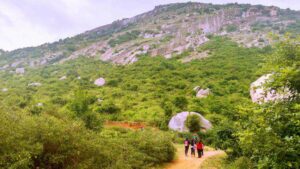 Also known as Kalavara Durga, Skandagiri Hills is best known as a trekking destination. Panoramic views, historical significance, and proximity to Nandi Hills are some other factors that make Skandagiri one of the most rewarding hill stations near Bangalore within 100 km. The 3800-feet high hillock of Narayanagiri is one of the lesser-explored trekking locations near Bangalore. The major attractions here are a temple and the ruins of a fort on the top of the hill, not to mention the amazing views you can enjoy from the rocky hillock. 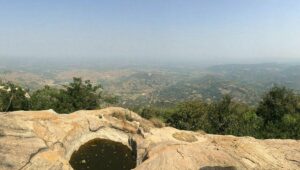 Bilikal Rangaswamy Betta is one of the emerging trekking destinations near the city of Bangalore. The hill is part of the forest reserve maintained by the Karnataka Forest Department. The temple at the top of the hill, which is the major attraction in Bilikal Rangaswamy Betta, is built under a huge granite rock. 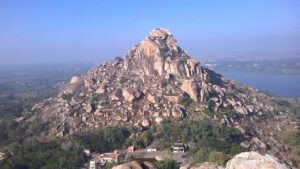 As the name suggests, Kunti Betta is a famous trekking destination with mythological significance– they said the Pandavas to have stayed here during their exile. Coconut trees, sugarcane fields, and paddy fields surround this picturesque hill, which adds to its charm.